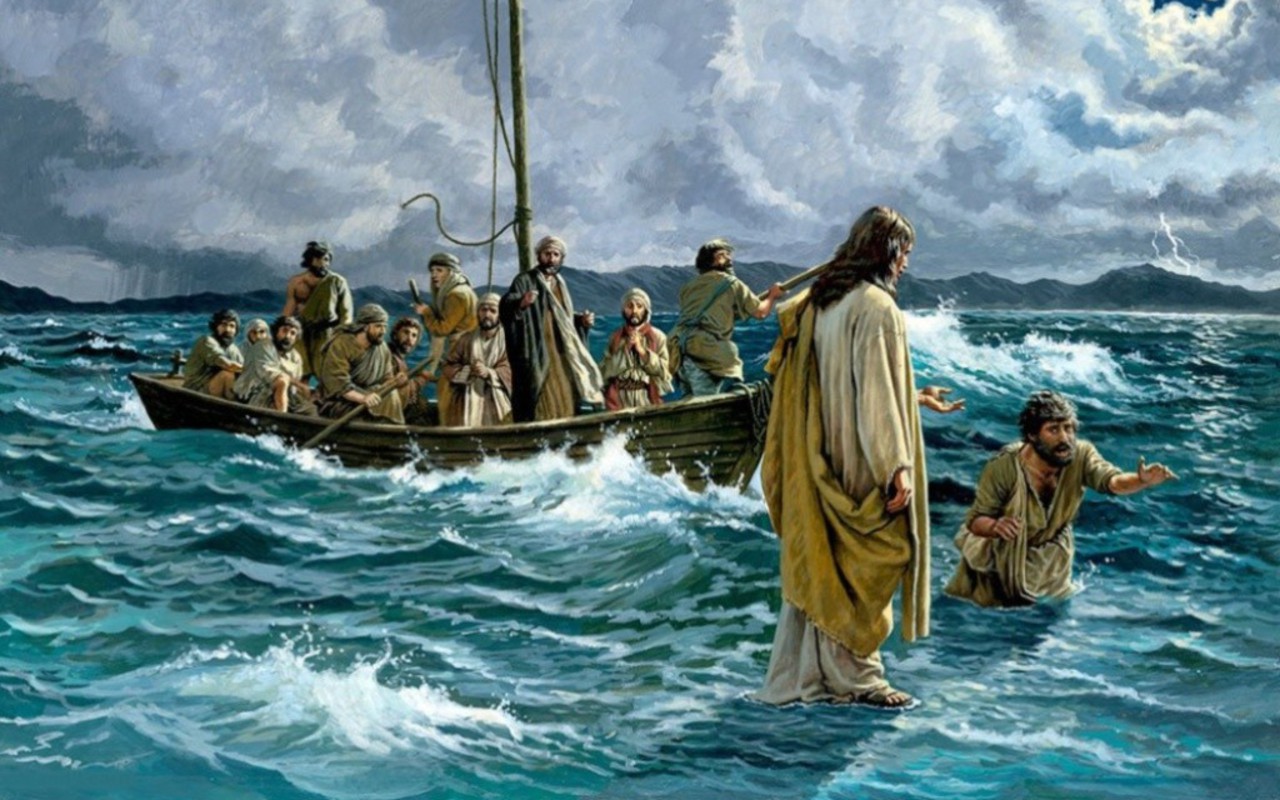 Peter walked on water but was said to have had little faith… How much faith did those in the boat have?

Boat faith is no faith.

Big Idea: Step one to a life of great faith is deciding you are going to do SOMETHING!

It’s easy to read this story and think this was Peter’s moment of great faith! But if you know Peter’s story, you begin to realize that there were many small steps of faith that lead him to this moment.

Do something! You don’t have to stand on a box on a street corner and tell everyone to bring their sick to you to be healed… But maybe you could buy someone’s gas, take someone to lunch, offer to babysit someone’s kids for free, invite someone to Church…

Here is cool story: A guy is sitting in a restaurant with some friends. Another man walks in and finds a table all to himself. The first man feels led to buy the second man’s meal and leaves a simple note on the back of his receipt to let the guy know that God loves him.

Fast-forward a few weeks. The first guy is walking through the frozen food section at Walmart when a Walmart employee walks up to him and says hey. “You don’t remember me do you?” “Nope,” the first guy admits… “You bought my meal the other night at the restaurant. My name is Jefferson.” The first man knows this is a God encounter, but after talking to Jefferson for a while, he can’t figure out what God is up to and they part ways.

On the way out of Walmart, the first guy bumps into an old friend who was far from God who also worked at Walmart, but was obviously not working that night. “What are you up here for?” The friend replies, “Do you want me to be honest?”… Uh oh. “I am up here to beat a man within an inch of his life… and my friends are waiting in the car and they are taking about just killing him and getting it over with.”

The first man said, “Well, good luck with that. Have a good day”… No, of course that’s not what he said, but what do you say? He talked to the guy trying to figure out what was up. Apparently there had been a previous altercation started by the guy he wanted to pound. Then he asks the right question, “what’s this guys name?”… “Its Jefferson and he works in the frozen food department.”

I know, right? He explains to his friend how God set up these events to keep him from making a huge mistake and the night ends with the two guys who had been fighting, hugging… Yeah, only God does that.

But it all started with such a simple, small act. Here is how you can position yourself for a similar story of your own:

LOOK for opportunities to step out in faith in small ways. It may be a chance to buy someone groceries, give the largest offering you’ve ever given, pray for someone to be healed (remember, THINK outside the box of what’s normal for you).

ASK God for the command! This is where people miss it! We often ask God to let us do great feats of faith when we can’t be trusted to carry out the small steps of faith right in front of us!

The best way to ASK God to do the supernatural by being faithful in the natural.

The BIG ask actually begins as a SMALL task!

“If you don’t DO faith, you don’t HAVE faith” – Pastor Steven Furtick

I love me some one liners….

Challenge: Pick something simple you can do as an act of faith this week.

Do you have a cool God story? What ideas do you have for simple acts of faith for this week?